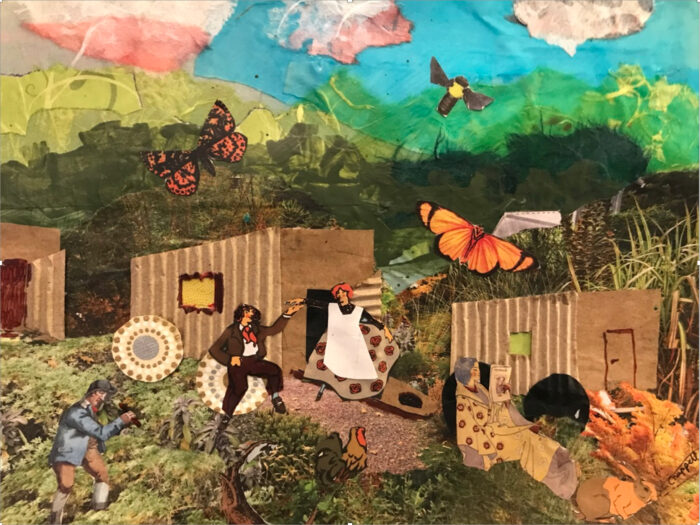 Editor’s note: In this short blog series, artist and von Arnim fan Carol Chappell explores a taxonomy of the writer’s most memorable female characters.  In this post she draws our attention to . . . The Almosts

In my last post, we met ‘The Breakaways,’ in which Netta Baines Dodge achieves her freedom in Father. But von Arnim’s novels also include many ‘Almosts,’ who see freedom and experience it but cannot or are not willing to change their circumstances. The one that comes to mind for me is Edelgard von Ottringel in The Caravaners (1909). Living with her husband Otto in Storchwerder,  Edelgard has never experienced freedom. Prussian society is governed by strict rules of decorum for men and women. The lines of class, behavior and social interaction are not to be crossed without dire consequences.

It is clear that daily life in a traditional Prussian household is joyless and restrictive for her. The Baron sums up the life of the Prussian wife, who ‘ looks up to her husband and after her children and is extremely intelligent in the kitchen and not at all intelligent out of it.” [31] Men do not lift a finger to do anything of a household nature. Women are not allowed to talk with men and must confine their own conversation to the kitchen, the nursery,  and relevant housekeeping tasks.

A holiday intervenes. The Baron and Edelgard make a trip to England in order to join a caravan consisting of eight other people with whom they will explore the English countryside. The cheapness of the holiday is its prime attraction for the Baron: less costly than Switzerland, and no fussing with hotels, taxis, and waiters. But Edelgard sees freedom from the stifling domesticity of her home.

The book takes the form of a journal account of their caravanning holiday, written in the Baron’s own words upon their return to Storchwerder. Von Arnim makes use of this literary device so readers can readily discern how bad the Baron’s behavior is, at the same time highlighting the fact that he is completely insensitive to the fact.  It’s clear to the reader that the other members of the caravan cannot countenance the Baron’s prejudices nor his shirking of duties or his rudeness.

But the Baron’s account of the caravanning holiday also unwittingly allows us to see  Edelgard blooming in the newfound freedoms she experiences. She shortens her skirts as she notices the fashion of the other women in the caravan. It is also a matter of comfort, for her long skirts drag the ground and are constantly stirring up dirt and getting more and more grimy. She finds freedom in sharing domestic duties too. The men in the company give the women a hand down from the caravans, and join in making meals and cleaning up. All the men in the company, except for the Baron, pitch in willingly in all matters concerning the welfare of the caravans and the vehicles themselves, which is completely new to  Edelgard.  She glimpses a completely different way of life, in which women are accepted and conversation includes both men and women. Edelgard enjoys these exchanges, which even include conversations about politics with fellow holiday-maker Jellaby, an English MP.  Unsurprisingly, Otto finds Jellaby’s political aspiration–to use his position in Parliament to help the poor and disadvantaged–to be a wasteful use of resources. As the holiday progresses, Edelgard begins to ignore Otto’s constant demands for her attention. In fact, when Otto needs Edelgard the most, she is not to be found. His behavior is so bad, in fact, that it alienates his fellow holiday-makers and ends up shortening their trip from a month to a single week. Edelgard’s taste of holiday freedom comes to an end and she returns with her husband to  Storchwerder.

We get covert glimpses in the book of the lengths to which some women will go to escape the confines of a bad marriage. The reader sympathizes with the Baron’s first wife, Marie-Luise, who experiences disappointment after disappointment in her marriage; after two babies who only live a few minutes each, Marie-Luise faces long years alone with Otto. Who can blame her for falling under the wheels of a wagon and dying in order to escape this marriage? True to form, Otto can and does.

Edelgard may return to Germany with the Baron but she is changed by her holiday. When they receive a letter telling them of the marriage between two of the caravaners. Otto is disgusted, but Edelgard is thrilled. To Otto it is unheard of that the bride–German widow Frau von Eckthum (whom the Baron admires, perhaps a little too much)–is to be married to Jellaby, a man with no money or family. When Edelgard reads the letter, she claps and says, “Isn’t it splendid–oh, Otto, aren’t you glad?” [389] This exchange clearly shows the difference in the experiences of the caravan adventure between Otto and Edelgard. The Baron found nothing to enjoy on the trip, while Edelgard found joy and happiness.  Her eyes were opened to another way of living. She can celebrate Frau von Eckthum’s freedom to marry Jellaby but has also found the freedom of thought within her own marriage to keep her young spirit alive, no matter how she must act outwardly.

So many female characters attempt to escape bad marriages in von Arnim’s fiction. Some break away at a great price. Others are only ever ‘Almosts’ because they cannot come to terms with breaking away completely. Von Arnim would return to the same fertile territory around a decade later in the novel Vera. Like Marie-Luise von Ottringel, Vera Wemyss manages to escape a constrictive marriage to a narcissist husband at the cost of her life. But von Arnim leaves us guessing about the fate of Wemyss’s second wife, Lucy. Will she manage to break away from a coercive marriage and find personal freedom?

Or will she join Edelgard von Ottringel in the ranks of the ‘Almosts’?

One thought on “The Almosts by Carol Chappell”