After adaptations for the stage and the screen, The Enchanted April is proving once more its versatility. The Pacific Coast Repertory Theatre is showing the world premiere of Enchanted April, A New Musical Romance. It is based on von Arnim’s novel and the music is inspired by the ragtime and jazz music of the 1920s. 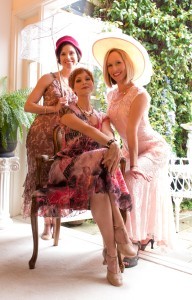 The musical was commissioned in 2009 by West Bay Opera and is a collaboration between pianist and composer Richard B. Evans and librettist and playwright Charles Leipart, whose work includes the award-winning musical Frog Kiss. Evans is best known for his recordings of contemporary American composers and his work on John Cage. Grandi Lois was the Founder and Artistic Director of the award-winning Playhouse West in San Francisco and today works as a successful performer, director and acting teacher.

You can listen to some of the music here. For more information and tickets, please visit the website of the Pacific Coast Repertory Theatre. Enchanted April, A New Musical Romance will be performed April 23 – May 8, 2016.