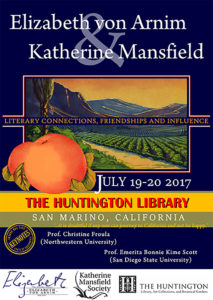 “There is a kind of turn in our sentences which is alike but that is because we are worms of the same family.” (Katherine Mansfield)

From critiques of anti-Semitism in von Arnim’s Mr. Skeffington to narrative “roomlessness” in Katherine Mansfield, the first joint conference between the Elizabeth von Arnim Society and the Katherine Mansfield Society had it all.  Held at the Huntington Library, San Marino, California on the 19 and 20 July 2017 the conference ranged widely in its presentations.

The conference sought to explore the literary connections, friends and influence that the two writers shared.  Attendees traveled from Australia, China, the UK and the USA to share the latest research on these two significant writers.

The conference attendees were treated to free access to the beautiful and extensive Huntington gardens and a museum exhibit curated by Huntington archivists of the letters exchanged between the two writers.  Many scholars also used the opportunity to view the personal papers of Elizabeth von Arnim in the Countess Russell archives prior to the conference.

The lively conference dinner at the El Portal Restaurant meant that conversations could continue well into the evening and conference attendees could experience beautiful Mexican cuisine.  Other significant attendees were Gayle Richardson, one of the conference organizers and chief Countess Russell archivist who has extensive and intimate knowledge of the archives.

9:00am Introductions and Welcome by the Organisers