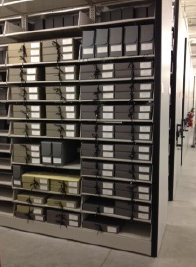 Countess Russell – Henry Norman Papers: 1 box, 23 pieces (1931-1938)
Finding Aid (pdf)
The collection consists of letters written by Elizabeth Russell, Countess Russell, to her friend and neighbor, Henry Norman. The letters span the years 1931 to 1938, and discuss her life, family and friends, the current authors of the day, including Michael Field, James M. Cain, Rebecca West, and Virginia Woolf, as well as current political events and the rise of Benito Mussolini and Adolf Hitler.

Henry Herron Beauchamp Papers: 7 boxes, 121 pieces (1870-1942):
Finding Aid (pdf)
The collection consists of H.H. Beauchamp’s Journals with typewritten transcriptions for the years 1870-1907, in which he wrote extensively about family matters, as well as, his travels, often pasting in photos, newspaper clippings and other printed material about the places he visited; the collection also includes letters written by Beauchamp, mainly to his wife, Elizabeth Lassetter Beauchamp, and other family members. A second major part of the collection is the Elizabeth Mary, Countess Russell, Address book, correspondence, with one letter by George Moore, ephemera and manuscripts, which consist of two typewritten copies and printed proof sheets of her novel, “Mr. Skeffington.”

The Elizabeth Library:
Held in the Rare Books collection at the Huntington Library, these volumes were part of the author’s personal library. The call numbers of the volumes in the Elizabeth Library are 644801-645129. Records for the whole library are available on the Huntington Online Catalogue; do an author search for: “von Arnim, Elizabeth, former owner”. These books were originally held by Ann Hardham and her siblings, but more importantly, they had a book dealer go through the volumes and he took an unknown number of volumes to sell on behalf of the family; the volumes which remained were donated to the Huntington.