The Conference Programme for the 2019 Elizabeth von Arnim “Identities” conference is now available. 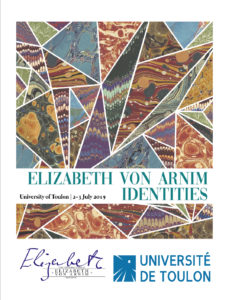 14.00 – 14.30 Introduction to the Elizabeth von Arnim Collection at the University Library

Concerns about the ‘aging problem’ crop up frequently within literature written by women across the cultural spectrum in the so-called ‘Roaring Twenties’. I will draw attention to one new medical solution to this ‘problem’ posited by endocrinologists in the 1920s – glandular rejuvenation[1]–  and track the manner in which this solution was taken up and examined by two middlebrow women writers of the period:  Gertrude Atherton in Black Oxen(1923) and Elizabeth von Arnim in Love(1925). These novels offer two very different literary ‘takes’ on the glandular rejuvenation procedure and its success as a health intervention; however, they both use the procedure as a vehicle for exploring ontological questions about the mature woman’s social purpose and identity in an age increasingly preoccupied with youth. Both novels also reveal a great deal about their authors’ own respective struggle with the ‘problem’ of aging on a personal level, as women, and as writers-of-a-certain-age in an increasingly competitive and diverse literary marketplace. Their choice to capitalise on relatively ‘young’ and emerging media to maximise the profits of their novels (film for Atherton and magazine serialisation for von Arnim) reveals both the opportunities and limits of the interwar middlebrow literary market for exploring women’s ‘problems’ in a consistent and politically meaningful way.

[1]Endocrine researchers such as Eugen Steinach claimed to have discovered a modern fountain of youth in the form of the ‘Steinach operation’, a simple procedure performed on men’s and women’s sex glands to reverse not just the signs of aging but the aging process itself. See Chandak Sengoopta, ‘Dr Steinach is coming to make old young!’: Sex Glands, Vasectomy and the Quest for Rejuvenation in the Roaring Twenties’.  Endeavour. Vol. 27(2003): 22-6.

Biography:  Jennifer Shepherd is a Lecturer in English Literature with The Open University. Her research interests include genres of the fin de siècle, middlebrow studies, the work of Elizabeth von Arnim, and the psychology of reading. She is currently working on discourses of gender and aging within transatlantic middlebrow literary production during the interwar period.

The group of novels written by Mary Beauchamp after Love has as yet received little critical attention. While something of the vigour and originality of the earlier works may be missing, they nonetheless remain fascinating, diverse fictions, sophisticated comedies that often develop themes from the earlier work. Nowhere is this more the case than in Father.

I will consider two aspects of the novel that relate more widely to Beauchamp’s work. The first is the theme of place and space. The novelist’s work has often considered the relationship of a central female character to domestic space, and allowed them degrees of liberation through solitary journeys or activity in the liminal, domestic-unconfined boundary space of the garden. In Father, the protagonist, Jennifer, undertakes independent travel to escape and appears to transgress societal and gender codes in her new establishment. I consider how Jennifer’s behaviour, centered around unconventional or absurd activity in her garden, is presented by Beauchamp.

The manner of this presentation relates to the second question in the paper: how the author uses the comic mode in Father, and why. Does the use of nonsense and the absurd, the ease and even comfort of the ‘delightful’ comedy, work against more serious satirizing of social norms? I will show that the ambiguities of the novel make Father all the more interesting, a key example of intermodernist women’s comic fiction.

Biography: Nick Turner is an Associate Lecturer at the University of Salford and English Curriculum Co-ordinator at Rastrick Independent School. His monograph is Post-War British Women Novelists and the Canon (Routledge, 2010), and he has recently published an essay on von Arnim’s The Pastor’s Wife in Women: A Cultural Review. He is co-chair and co-founder of the Elizabeth Bowen Society and co-editor of the Elizabeth Bowen Review, co-editor of the journal Writers in Conversation and a specialist on the work of Barbara Pym. Soon-to-be-published work includes an article on the crime fiction of Mary Fitt and an edited project on comedy in the work of intermodernist British women writers.

“Women Who Take to the Sofa: Family Limitation and Respectability in Elizabeth von Arnim’s The Pastor’s Wife”
Noreen O’Connor
noreenoconnor@kings.edu

Elizabeth von Arnim’s 1914 novel The Pastor’s Wife tells the story of a young woman who is swept suddenly into a marriage to a rural German pastor. The novel focuses on the next eight turbulent years of her marriage, providing an account of pregnancy, childbirth, illness, infant mortality, and a wish for escape. Through the story of an individual woman’s experience, The Pastor’s Wife engages with a contemporary cultural moment in which the very definition of respectable marriage and parenthood, and women’s bodies, was the subject of fierce medical, political and social debate conducted by men in high ranking positions of power. The cause of this debate stemmed from concerns raised by the British and French birth rate, which had begun falling significantly in the final years of the Victorian era and continued to decline, especially among members of the middle and upper classes. In the guise of a middlebrow novel, von Arnim provides an extraordinary political commentary on marriage and childbirth within “respectable” clerical families in the years before World War One. A close examination of the novel reveals its alignment with an emergent, much more radical and overtly political debate about women’s bodies, family planning, and the place of women within society.

The April Baby’s Book of Tunes, von Arnim’s third book, was issued in 1900 and illustrated by the renowned children’s artist Kate Greenaway, then at the end of her career. This skilfully structured trio of text, music, and pictures is as closely connected to biographical details of von Arnim’s life as are her novels for adults. She addresses, too, several of the themes central to her oeuvre with a piquant lightness of touch suited to a young audience while slyly sustaining the interest of their elders. The interesting publication history of the book shows von Arnim’s growing dexterity in handling her relationship with Macmillan and Co., and the artistry of the freshly composed songs captures in purely musical terms the precision and vitality we all admire in her. This earlier ‘April’ of her titled works is, literally, enchanted.

Biography: Presently a Member of Wolfson College Oxford, Sally Horovitz graduated with a double first after winning an academic scholarship to read Music at St.Hilda’s College. During her doctoral study, she was elected a Graduate Scholar at Wolfson, concurrently studying music analysis at King’s College London. Sally has held Lectureships in Music at St. Hilda’s and St. Edmund Hall and Membership of the Faculty of Music, Oxford. She currently researches early keyboard instruments, eighteenth-century English theatre music, and nineteenth-century French song.

“Neither Art Itself nor Life Itself: Life Writing by Elizabeth von Arnim and Virginia Woolf”
Juliane Römhild
j.roemhild@latrobe.edu.au

Thinking of her biographical novel Flush, Virginia Woolf wrote, ‘Since lives have to be written, every life must be distorted’. I am interested in the biographical ‘distortions’ in Orlando, Flush and All the Dogs of My Life. Not only do all these novels include dogs and photographs, but they also create their subjects with rather more freedom than we usually accord the (auto)biographer. They are, in Woolf’s words, ‘New Biographies’. In my paper, I explore how the play with fact and fiction in the manipulated photographs enable von Arnim and Woolf to make personal statements about love, pleasure, and pain that cannot be easily verbalised.

Biography: Juliane Römhild is a Lecturer at La Trobe University, Melbourne. Her research is on British and German interwar literature. She is particularly interested in women’s writing, middlebrow novels and representations of happiness in fiction. She is a founding member of the Elizabeth von Arnim Society and her monograph Authorship & Femininity in the Novels of Elizabeth von Arnim (Fairleigh Dickinson UP) was published in 2014.

The Enchanted April(1922) is a deceptive novel immured in a post-war context, a period noted for its wistful and sometimes satiric writings. Von Arnim’s novel is part of this oeuvre and portrays escape to a carefully described pastoral enclave away from encroaching urbanisation and the spread of new technologies, in an era when the Great War had left many emotionally and physically starved. The journey to San Salvatore by four unhappy women is an escape from stifling parochialism, constraining social and gendered expectations as well as stultifying insularity, but the evocation of an extraordinarily aesthetic and ‘enchanted’ location suggests more than personal recuperation and reshaped identities. This novel presents the restorative properties of pastoral nostalgia and the probability of dream and, in this sense, The Enchanted April is textual reparation for lingering First World War trauma, illuminating a contextual relevance difficult to forget when the novel first appeared in 1922. This paper takes these ideas and discusses the transposition of the novel into the award-winning film of 1991, directed by Mike Newell.

Biography: Isobel Maddison is a Fellow of Lucy Cavendish College, University of Cambridge, where she is a College Lecturer and the Director of Studies in English. She works primarily on female modernism and on the connections between modernism and popular fiction. She also has interests in women’s writings of the First World War. Isobel has published on Dorothy Richardson and Katherine Mansfield and is the author of several articles on Elizabeth von Arnim’s work. Her monograph, Elizabeth von Arnim: Beyond the German Garden, was published in 2013 and is the first full book-length treatment of von Arnim’s fiction. Isobel is a founding member of the Elizabeth von Arnim Society and the society’s first president.