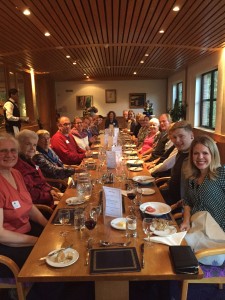 September 13th 2015 saw the first-ever academic conference on the writing of Elizabeth von Arnim, “Re-Evaluating Elizabeth von Arnim”, at Lucy Cavendish College in Cambridge. Organised by Jennifer Walker, Isobel Maddison and Erica Brown, the conference hosted an international crowd, and, from the outset, it was clear this was going to be a successful and stimulating day.

Academics from the United States, Australia, and Turkey (amongst others) were joined by von Arnim enthusiasts as well as by Gayle Richardson–the keeper of the Countess Russell archive (one of von Arnim’s many names) at the Huntington Library, California. It was a pleasure to meet Gayle and to hear her speak of the collection; this is a rich resource for scholars that remains, as yet, reasonably unexplored.

The day was made particularly special because three members of von Arnim’s family attended: Jamie Ritchie, Caroline and Hugh Gathorne Hardy. Their personal insights were illuminating and their pleasure at finding von Arnim so well-regarded by academics was evident. Jennifer Walker had produced a large and detailed family tree which helped everyone work out just who was who. And thanks are due to David Norton who kindly loaned the conference a previously unseen photograph of a3-year-oldd Mary (Elizabeth von Arnim’s original Christian name).

The final plenary session considered the ‘way forward’ and there was enthusiasm for another conference and for the creation of an Elizabeth von Arnim Society – already in hand. Publications are likely to follow with an edited journal but, for now, it was simply a pleasure to discuss von Arnim in a ‘collegial’ atmosphere with a group of well-informed and engaged people who could quote her more witty statements by heart.

A lively conference dinner was an excellent end to a memorable day.